King George Royal Indian Military College, Bangalore was established on 1 August 1946 to facilitate education of the sons of defence personnel from South India. Cadets were educated, then from III to VI form to enable them to appear for the Army's Special Examination, which was equivalent to high school education. The three Houses, at those times were Coot, Give and Cornwallis. The School was reorganised in September 1952 and was thrown open to sons of commissioned officers and civilians. The name of the school was shortened to King George's School. The school motto was 'Play the Game'. A member of lPSC (Indian Public School Conference) the school prepared cadets for 'Senior Cambridge Examination' from 1952 to 1962. The nascent patriotic fervour found its local expression when the houses were renamed as Rajaji, Nehru and Mountbatten. The Mountbatten House was changed to Tagore House and a new House by name Shastri House was created. In 1966, The School's name was altered to 'Bangalore Military School' and after four years of its affiliation to ICSE, the school adpoted a CBSE syllabus in 1967. In 1969, The school's motto was changed to "Sheelam Param Bhushanm ", a Sanskrit Shloka which means "Character is the highest virtue'. Thereafter, the school celebrated its Diamond Jubilee from 08th Dec to 10th Dec 2006. In July 2007 the school was redesignated as "Rashtriya Military School" Bangalore.

Rashtriya Military School, Belgaum was founded on 30th December 1945 at Belgaum in the then Bombay province. It was then called King George VI Royal Indian Military College. This was the fourth such institution set up in the country. Initially admission to the school was restricted to the sons of JCOs and OR of the Army and their equivalent ranks in the Navy and Air Force. The boys were prepared for the Army Special Certificate Education Examination. The Instructional staff was drawn exclusively from the Army Educational Corps. It was incumbent upon all boys to join the defence service after finishing School. On Republic Day 1950, the School was renamed King George's Military College. In July 1952, the School was re-organized along the lines of Residential Public Schools. Admissions were thrown open to the sons of service Officers as well as Civilians. The school switched over to the Senior Cambridge Certificate Examination and the pre-condition for admission that all boys should join the defence services was withdrawn. The School was simultaneously renamed as King George's School. In 1963, the School was affiliated to the Central Board of Secondary Education (CBSE), New Delhi and the boys switched over to the Higher Secondary Examination conducted by the Board. On 01 January 1966, the School was renamed 'Belgaum Military School'. Belgaum, In January 1988 the prefix 'Belgaum' was dropped and the School was redesignated 'Military School Belgaum'. Since Jun 2007, the school is known as Rashtriya Military School, Belgaum.


Rashtriya Military School Chail (Shimla Hills) is a residential English Medium Public School under the Ministry of Defence. The foundation of this school was laid by the Prince of Wales in Feb 1922 and the School started functioning in Sep 1925 at Jalandhar Cantt. In 1952 the School was shifted to Nowgong (MP) and was moved to its present location at Chail in 1960. The school was renamed as Chail Military School with effect from 01 Jan 1966 and now as Rashtriya Military School Chail wef 25 Jun 2007. Rashtriya Military Chail was initially known as King George V's Royal Indian Military School, later called as King George V's Royal Indian Military College and then as King George's School. Military Schools provided education to sons of the Defence Service personnel and prepared them for career in the Armed Forces. In 1952 Rashtriya Military Schools were organized as residential Public Schools for boys. Their objectives were enlarged and admissions were thrown open to the sons of Defence Service Officers and Civilians. These Schools are the members of Indian public Schools conference.
The School Office functions from 0830 hrs to 1430 hrs and 1530 hrs to 1630 hrs on all working days, school office will remain closed on Sundays and Holidays. The Academic and Administrative head of the school is the Principal who is assisted by Administrative Officer of the rank of Captain/Major from Army. 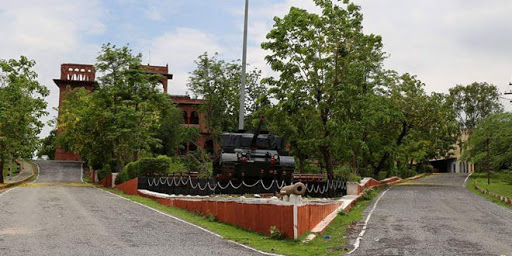 Rashtriya Military School Ajmer, with its panoramic view of surrounding hills, spread over 87 acres was founded on 15 Nov 1930 as King George's Royal Indian Military School to take care of education of sons of defence personnel. In 1952, the school was reorganized on public school lines and admissions were made open to the sons of Defence service Officers and Civilians. In 1954, the school became the member of the India Public School Conference (IPSC).The School was renamed Military School in 1966 and its old motto 'Play the Game' was replaced with 'Sheelam Param Bhushanam' which means 'Character is the highest virtue'. On 25 June 2007 the school got its present name 'Rashtriya Military School Ajmer'.
The Rashtriya Military School Ajmer, an English medium school affiliated to CBSE, New Delhi is a catagory 'A' establishment run by the Ministry of Defence and is an active member of the IPSC. The school has several of its alumni occupying high positions in the Armed Forces and in other sectors doing stellar support to the motherland.

The schools are category ‘A’ establishment of the Army and are administrated by the Directorate General of Military Training at IHQ of MOD(Army). The Central Governing Council(CGC), headed by the Defence Secretary, Ministry of Defence is the apex body for these schools.